Orlando’s Column – A Statue of an Armoured Knight

A symbol of independence and sovereignty

Positioned in the middle of the main square, Orlando’s column is one of the most popular monuments in Dubrovnik. Made by Italian master Bonino di Milano in 1419, the statue is a symbol of independence and sovereignty.

The idea for raising the column comes from the visit of the German King Sigismund to Dubrovnik in 1396. He familiarized the citizens of Dubrovnik with the significant role which the legendary knight Roland (or Orlando) played in cities in northern Germany, where statues have been raised in his honor. 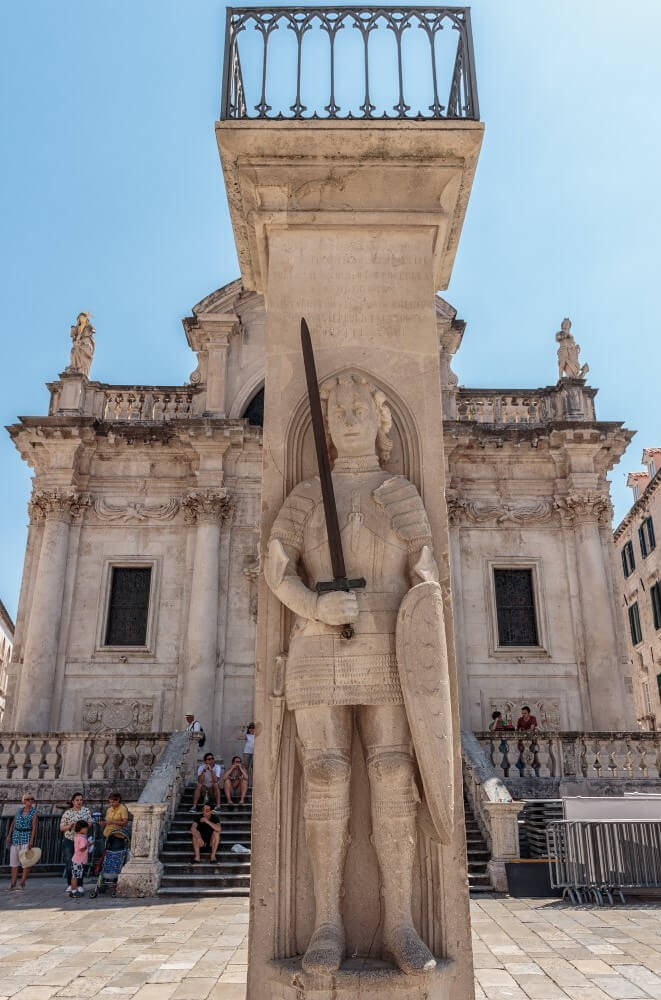 By accepting the idea of King Sigismund, and for the purpose of emphasizing the independence of Dubrovnik in relation to other countries, the column was raised at the main square, in front of Church of Saint Blaise and close to Rector’s palace and the Council House. The image of knight Orlando was carved in stone, depicted wearing body armor, with a sword in his right hand and shield in his left.

Orlando’s column had several functions and significance. At the top of the column, there was a place for the mast which flew the flag of the Republic of Dubrovnik. At the foot of the column, there is a carving of the measurement for length known as „Dubrovnik elbow length“ (today 51,2 cm), the purpose of which was to facilitate measurement for commercial transactions.

At the site of Orlando’s Column laws and various decisions of the government were declared, judicial decisions and important events were announced.

If you join us on Dubrovnik politics & religion tour, or Early Bird & City Walls tour, we’ll make sure we tell you more about it.

Orlando’s column was also used for punishment because it stood in the former site of punishment pole. It is beyond doubt that Orlando’s Column was, throughout four centuries, an important symbol of the sovereignty of the Republic of Dubrovnik, its political independence and rule of law.

← The Patron Saint of Dubrovnik Dubrovnik's Unique Legacy - the Quarantine →