The red roofs tops, karst stone quarries, and the Adriatic are the epitome of this area. Dubrovnik’s roofs have always been yellow ocher, never red. They are covered with long unique tiles, called “kupe”  that were made in Kupari near Dubrovnik. These durable tiles lasted about 200 years.

The Caprivating Terracotta Rooftops and the Distinctive Limestone Walls

Unfortunately during the recent Homeland war in the 90s, there were 111 direct hits on Dubrovnik’s ramparts. The most critical damage was to the town’s rooftops. Two out of every three buildings were hit, and the projectiles pierced more than 60 percent of the tiled roofs. They were severely damaged during the mortar shelling by the Yugoslav Army.

The war ended and since production ceased a long time ago, there were no more yellow ocher tiles from Kupari. The roofs were restored with new red tiles that do not change color over time. During the restoration, the attempt was made to move the remaining yellow ochre tiles to the seaside, so that, at least from passing ships, Dubrovnik could keep its historical appearance. To understand what lead to the conflict and why it happened to this Heritage site you can join the Besieged City tour- book here. 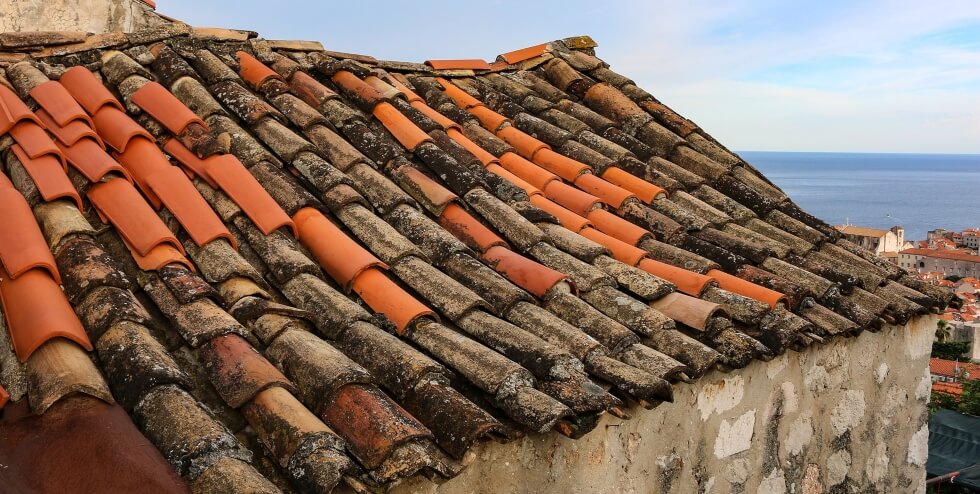 The old and the new tiles intertwined

Stone houses are an integral part of Dubrovnik’s republic urban planning. It was based on rational decisions and moderation.

By 1360.  all wooden homes had been demolished due to fire hazards and a very important incentive was introduced to the public. Only stone properties were allowed to store unlimited amounts of white dry wine Malvasia in their wine cellars. People were quite eager to comply. Dubrovnik government mined limestone of excellent quality from the island of Korčula, exclusively from the small island of Vrnik that once had 29 quarries, and used it for their most important buildings.

Famous Irish playwright George Bernard Shaw once said that “those who seek paradise on Earth should come to Dubrovnik and find it”, and after witnessing the beauty of Dubrovnik for the first time, it’s easy to understand what George was on about.

The starting point of all things old city is Stradun –  Dubrovnik’s main street connecting the east and west sides. Its limestone pavement is today polished by constant use and as smooth as ice, shining bright and mirroring light as if its stony surface were made of glass. From here, all the main attractions can be found, including the ever-popular Game of Thrones locations.

Don’t let recent tv shows define your visit though – there’s a lot of history inside these walls waiting to be explored, so take your time and get a little lost through the alluring stone laneways. If you find the time we would love to have you on our daily Early Bird& City Walls tour, book here.