The Art of Laundry in Dubrovnik

The artistry of the Dubrovnik clothesline

Most apartments within the old city rampards do not own a dryer and even modern apartments downtown save money on electricity and use a metal drying rack on the balcony. A great concept except for a windy day. Bras and panties could easily end up in the garden or your neighbor’s terrace. Some thus prudently move their rack indoors.

On the other hand, the more advanced and authentic way to dry the laundry is to hang it on pulleys that run along the outside wall of the building and connect one window to the next. Even better drying system is a laundry line that extends to your neighbor’s flat across the street. While there, it can do wonders and save time. It is quite easy to send over to your neighbor’s flat some sugar, coffee… and to the friendlier ones to send love notes. The perfect opportunity to see the clothes drying ritual of Dubrovnik’s Old Town citizen is to book our Hidden Gems tour.

Hanging washed clothes on a clothesline is an acquired skill. It can be a high-wire act that requires engineering, dexterity and certainly reliable clothespins. If done well, it actually can be an art form. One should always plan ahead and do laundry in Dubrovnik according the weather. In fact, hanging clothes is a peaceful and calming ritual. There is no loud appliance. 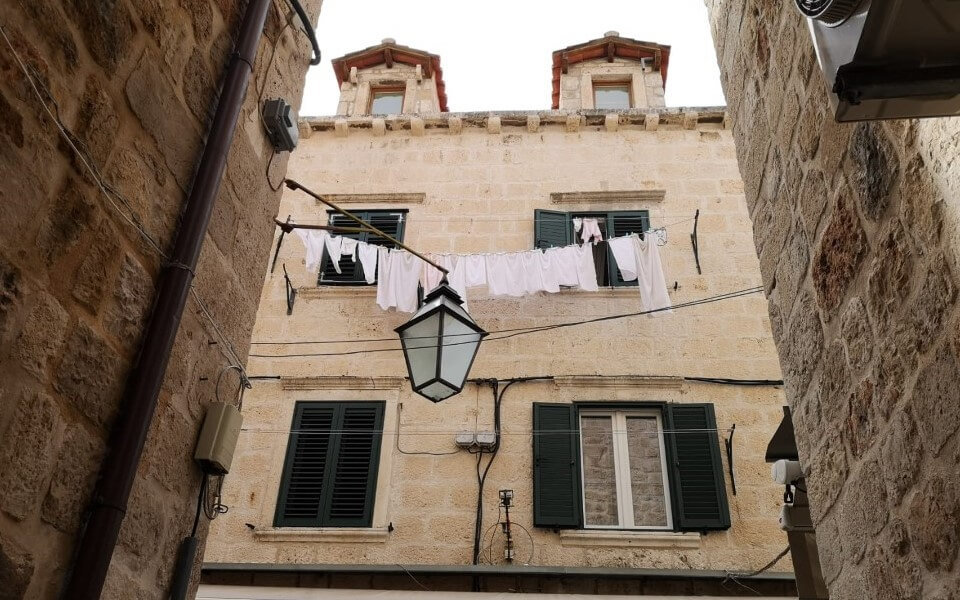 The usual scene in the Old Town when you look up

”Tiramola” is an expression used for centuries in this region and this particular word is an old and important colloquial term in the maritime field. Sadly, in the most recent poll carried out by the University of Dubrovnik among Maritime department students has shown that words such as tiramola are fairly fast disappearing and being replaced by modern terms in today’s generation of our seafarers.

What’s more important, you get to smile to your neighbor while you are both hanging the laundry. It is in these small moments, these seemingly inconsequential interactions, where we find Dubrovnik reflects a brilliant blend of tradition, pleasant life and hospitality.

Nevertheless, tiramola or washing lines give signs of life in the old quarters of Dubrovnik. They clearly show that the city is indeed a city and not a museum. In 1961 there were around 5,500 people living here, but forty years later that number had halved.

Over the past years fewer and fewer citizens call the ancient city home. Of course it must be taken into account that during those four years the Homeland War of the early nineties meant that people were forced to leave their homes. Today the number is believed to be around 800.

It is heartening to see at least some signs of life in the UNESCO World Heritage Site. And what better way to spot the last citizens than to catch their full washing lines on a sunny day. In fact, these very washing lines are not a white flag of surrender but a source of attraction and interest to the international visitors that arrive every year.