Need a break from all that media? Want to reconnect with the rhythm of nature? See the world though different eyes? A coastal town just north of Dubrovnik is a special place where sun, salt, sea and stone all come together to create a story that speaks directly to the heart and soul. Visit Ston saltworks!

The saltworks in Ston are said to date to Roman times. Sea salt was a precious and highly coveted mineral. It is a lesser known fact that salary comes from the Latin word salarium, which also means and has the root sal, or “salt.” In ancient Rome, it specifically meant the amount of money allotted to a Roman soldier to buy salt, which was an expensive but essential commodity. 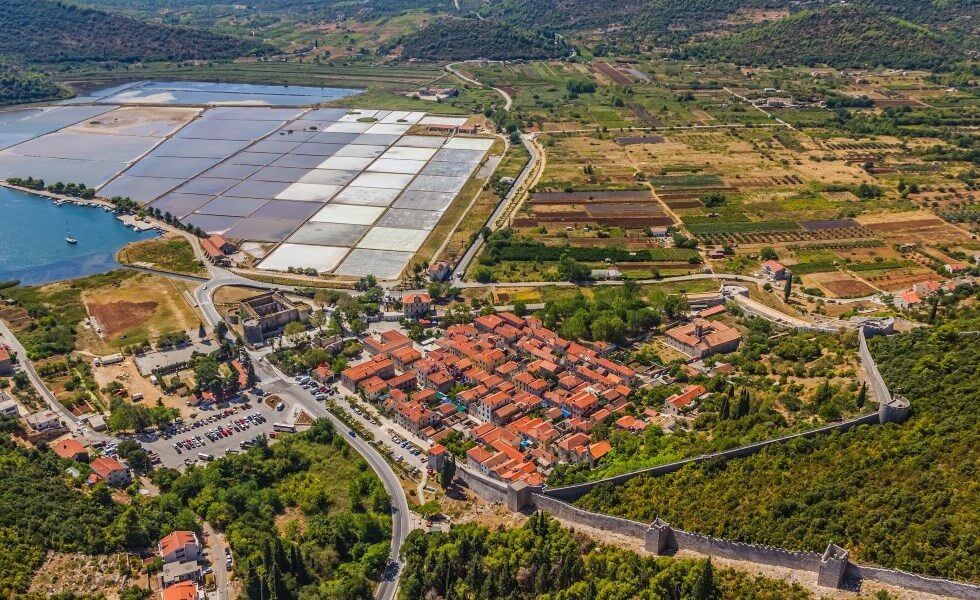 Ston saltworks have remained faithful to the traditional and natural methods of salt production which has not changed since possibly as far back as 4,000 years. It consists of nine basins and all but one Mundo (the World) are named after saints.
“The purest salt was extracted and then sent to the Wienna court from the pools of St. Blaise and St. Lazarus with the granite base. It is possible to harvest 500 tons of salt annually.”
Ask anyone to name a great wall and the chances are that the word China will appear somewhere in their answer. However, Ston has a well kept secret – a wall hundreds of years old which is the longest fortification system built around a town in Europe, after Hadrian’s Wall (117km). In the beginning of the fifteenth century, Ston walls were heavily fortified – there are thirty rectangular towers and ten round ones dotted along the five kilometre stretch. What was it that they were built to protect? Apart from serving as a first line of defense for the fairly distant city of Dubrovnik they were constructed to protect a precious commodity – salt. Modern day value is seen in the production of the flower of salt or as the French refer it fleur de sel. The coarse salt settles on the bottom of the marsh, but salt crystals form on the surface, forming a delicate crust of snowflake crystals. The delicacy requires that it be harvested by hand, so this is done with traditional methods using traditional tools such as wooden rakes. It can only be collected in small batches when it is very sunny, dry and with slow, steady winds. Perfect seasoning for your favorite recipes.
← Dubrovnik City Walls The Art of Laundry in Dubrovnik →