No visit to Dubrovnik would be complete without a walk around the spectacular city walls, the finest in the world and the city’s main claim to fame. The characteristic appearance of Dubrovnik is unmistakable as no other city in the world has retained their medieval walls so perfectly as was the case of Dubrovnik and that is why Dubrovnik is included in the World Heritage List from UNESCO as far back as 1979.

The City of Dubrovnik itself and some strategic footholds throughout its territory were well fortified and ready for defense in case of threat. Serious threats, especially the aggressive advances of Mehmed the Conqueror after the fall of Constantinople in 1453, the threat from Venice in 16th century and catastrophic earthquake of 1667, were a particular impetus to the inhabitants of Dubrovnik to additionally fortify the already massive walls and fortifications. 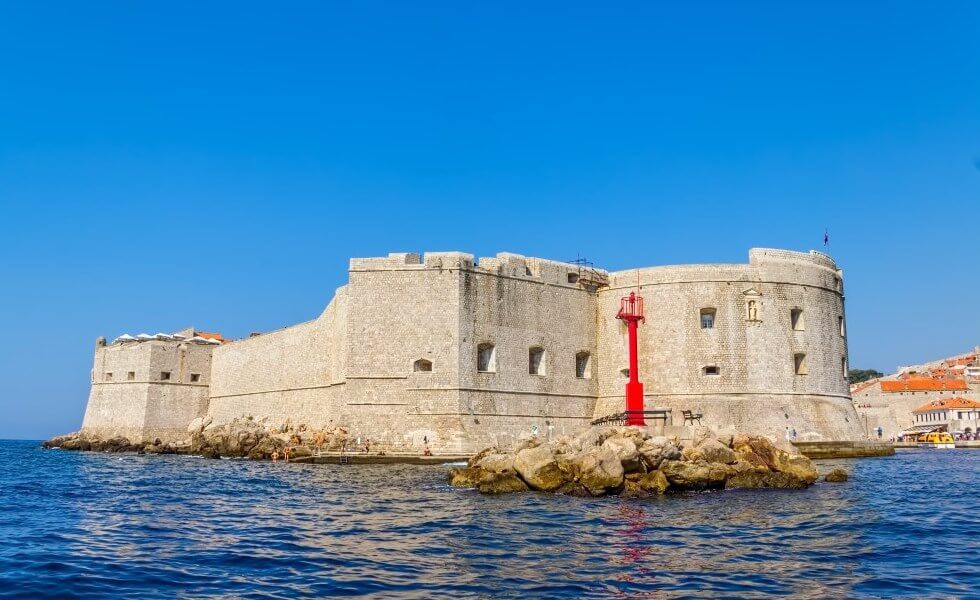 Dubrovnik was considered to be particullary well fortified settlement, foremost due to its heavily fortified walls and towers, of which two above all stand out, these are the fortresses Lovrijenac on the west and multi-purpose fortress Revelin on the eastern entrance of the city. Beside Lovrijenac and Revelin, we can`t forget the highest point oft he city wall, rounded fortress of Minčeta. Minčeta tower was completed in 1464 by the project of famous Croatian constructor Juraj Dalmatinac. The walls, towers and forts in Dubrovnik were raised and further strengthened from the 12th until the middle of 17th century.
“The lenght of the walls is 1940 meters, the ones facing the inland are from 4 to 6 meters wide, and those facing the sea from 1,5 to 3 meters. Their height reaches 25 meters.”
The walls also enclose and provide protection to the city harbor with the fortress of Saint John. They were built systematically throughout history especially in difficult times when permanent danger of foreign attacks lured over the City and the Dubrovnik Republic, and the walls have been preserved to the present day and are still functional, not only because of the proficiency of their skillful builders, but also care of the Dubrovnik citizens who maintained them and built upon them as necessary.
← Dubrovnik`s financial system & diplomacy Ston Saltworks →